with Greg Herenda
and Kenny O'Boyle 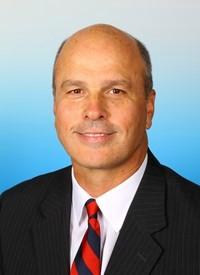 Greg Herenda is currently the Head Coach of the Fairleigh Dickinson Men’s Basketball team. He came to FDU after serving as the head coach at UMass Lowell from 2008-2013, where he posted a record of 95-56 (.629) en route to becoming the program's all-time winningest coach. During his first season at FDU, he returned the Knights to its first conference tournament since 2010.
He tripled FDU's conference win total during his first season and became the first head coach in the Garden State since December 1987 to defeat both Rutgers and Seton Hall in the same season. Herenda also developed Sidney Sanders Jr. into the most improved player in the nation after the Knights' co-captain saw his scoring average rise from 4.6 points per game as a junior to 19.1 points per game, the second-highest increase in the NCAA.
Herenda took over at UMass Lowell in 2008, inheriting a 12-win squad from the year before. In his first season, he was named the Northeast Conference-10 and NABC East Region Coach of the Year after leading the Division II school to a 21-8 record, which started a stretch of three straight 20-win seasons and four straight trips to the NCAA Tournament. During that time, Herenda led UMass Lowell to a NE-10 Tournament title in 2009-10, a semifinal appearance in 2010-11 and another championship game appearance in 2011-12.
Before leading UMass Lowell, Herenda was the head coach at Cabrini College for one season (2007-08), Division III school in Radnor, Pa. While coaching at Cabrini, Herenda doubled as a lead analyst and color commentator for YES Network's Ivy League basketball telecasts. Herenda started his head coaching career at Elgin Community College in Elgin. Ill., in 2006. He turned around a six-win team from the previous year into a squad that finished 18-11, won the Skyway Conference championship and reached the Region IV District B Junior College championship game for the first time in school history during his only season at the helm.
In his last three head coaching jobs, Herenda has improved his teams' win total by an average of 9.33 games in his first year with each of the programs.
Prior to becoming a head coach, Herenda was the associate head coach at East Carolina (2000-05), and an assistant coach at Yale (1997-99), Seton Hall (1994-97), Holy Cross (1989-94), his alma mater Merrimack (1985-89) and UMass Lowell (1983-85).
A four-year player at Merrimack, Herenda still holds the school record for assists in a game (22) and shares the record for the single-season average (9.0). He graduated in 1983 and earned his bachelor's degree in business administration and marketing.
Herenda currently resides in Bergen County with his wife, Jillene, and his 12-year old son Trey.

Kenny O'Boyle is a "Sports Geek." Not only that, he's wanted to be a sportscaster since he was a young boy.
Since Kenny enrolled at Fairleigh Dickinson University in 2007, he's been involved in the broadcasting and announcing of various athletic events for both FDU campuses to this day. He graduated with his BA in Communications in 2010 and a MA in Professional Communications/Media Studies in 2011.
He is currently the public address "Voice" of the FDU-Florham Devils Football and Men's/Women's Basketball teams, he was a graduate assistance for FDU Knights Athletic Department, and has been teaching Sportcasting at FDU since the Fall of 2011.
Most recently Kenny was named WFDU Sports Director in addition to his many other titles at the station and is now the Co-Host/Producer/Engineer/"Assistant Coach" to Greg Herenda on Sunday Mornings.
e-mail: kennyobradio@yahoo.com